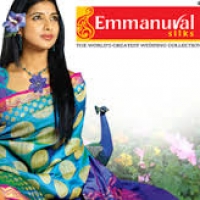 -Emmanuval Silks has lived the idea in its essence. What started off as a modest shop by the name Emmanuval Sarees in Mannampetta in Thrissur twenty years back is now the favoured retail garment and clothing destination for many. With two mammoth showrooms in Thrissur and Kottayam, Emmanuval will open the third showroom in Kochi by 2011. In our all branches we provide separate bridal collections. The shift from being a known distributor to a well-known retailer has been gradual. When Late Shri. T.D. Ouseph and Mrs Annie Ouseph started their little enterprise in the suburbs of Thrissur, the focus was on wholesale business. Over the years, as the business grew so did the number of concerns under the group. But the major shift came to be after the launch of the huge retail showroom at Thrissur in 2008. By then the group was being managed by the next generation; the brothers T.O.Shaju, T.O.Byju, T.O.Raju and T.O Jiju being the partners. Emmanuval has been committed to customer satisfaction and innovative styles. The group has a corporate social responsibility wing that spearheads the charitable activities of the group. In future, Emmanuval has charted a steady growth plan. As part of an expansion, showrooms are being planned at Kozhikode and Thiruvananthapuram.